The stories behind Pete's originals

Interested in learning about Pete's original art and the meaning behind them? Then check out the stories below which accompany each piece of work, giving insight into the artist's life, love of art and music, and of course, his well-known humorous side. 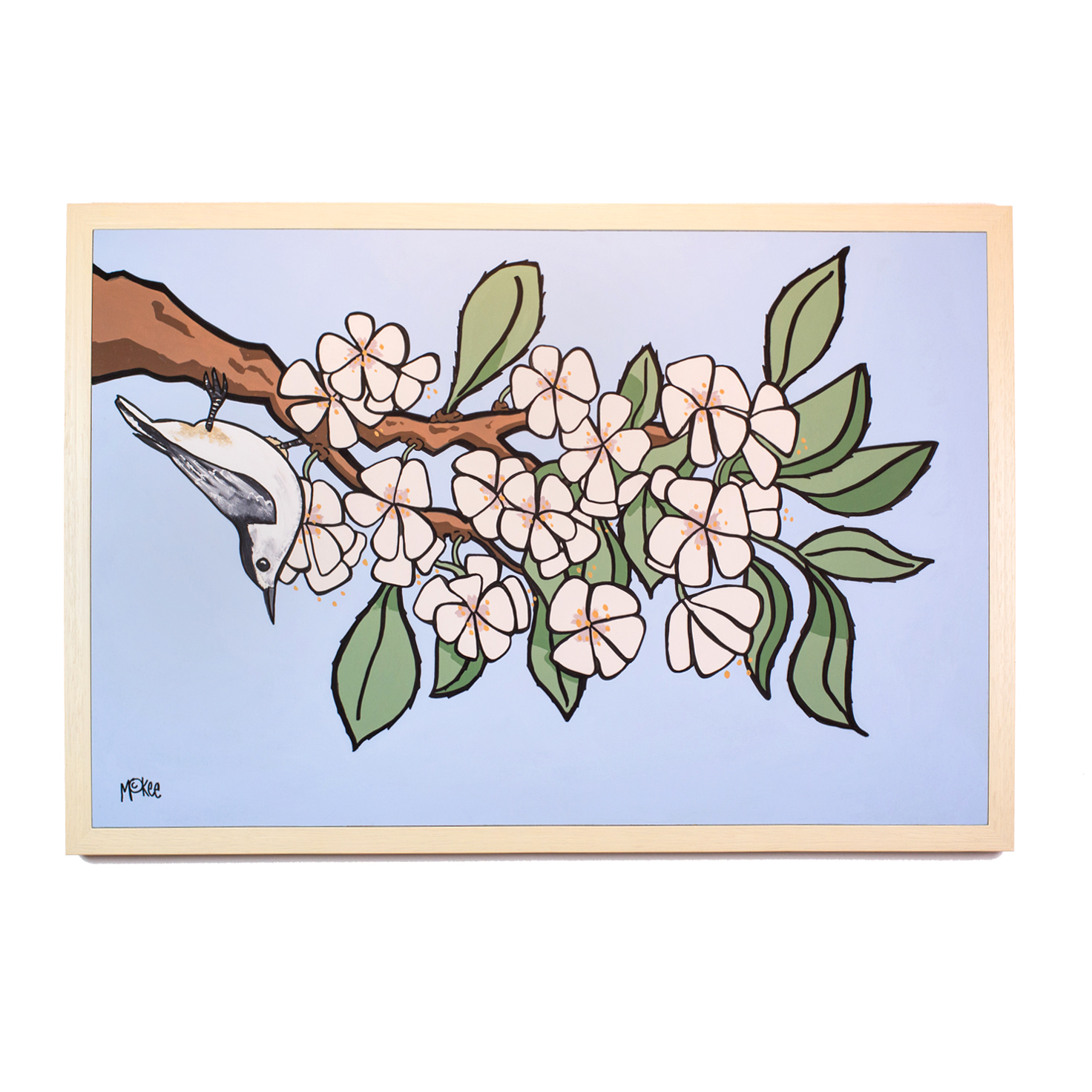 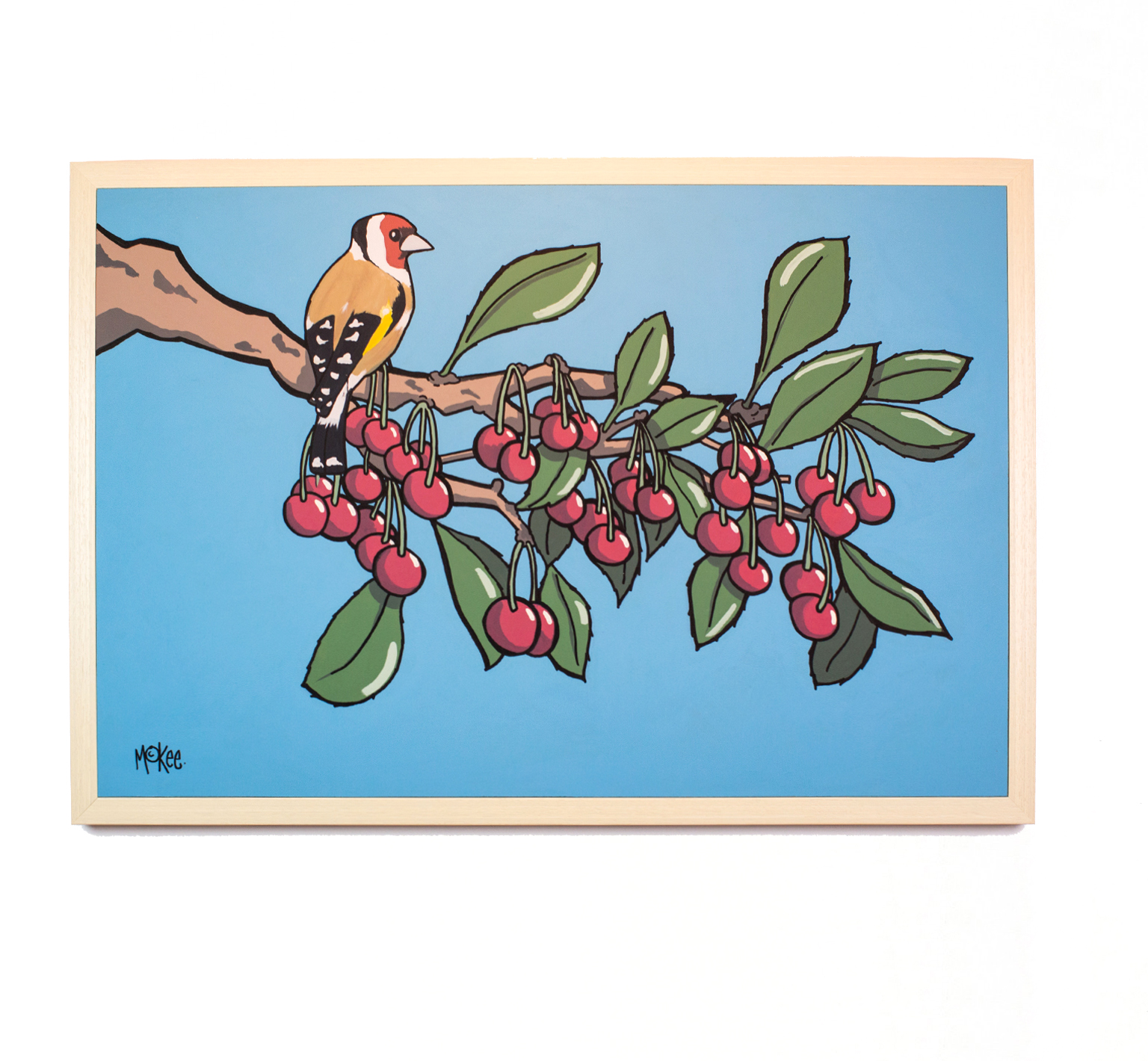 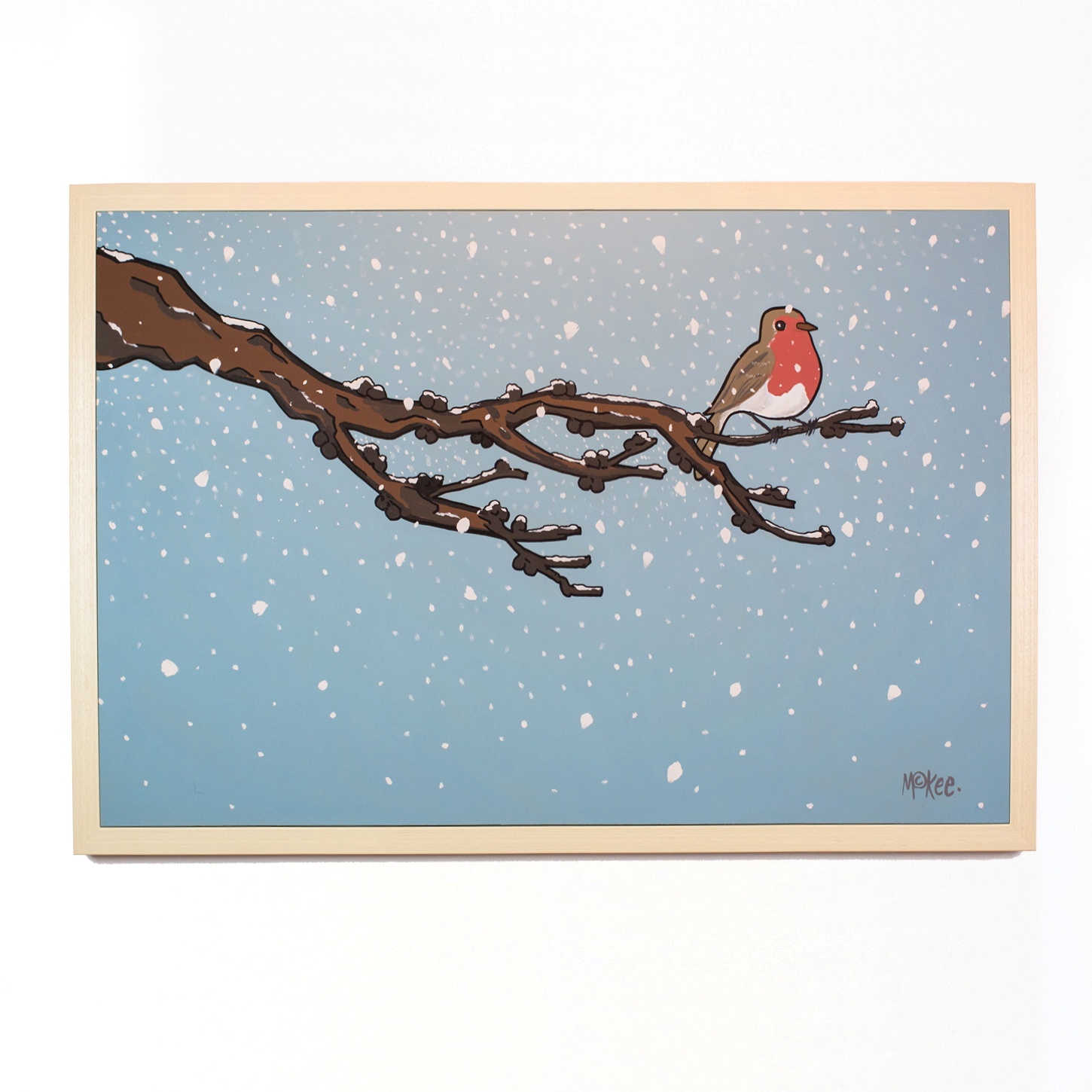 Painted in 2020 as part of a series of four, The Seasons paintings are very different to the artist's usual subject matter. Pete’s Spring painting is as joyful as it is beautiful and depicts the branch of a blossom tree in full bloom, which later bears cherries in the Summer painting. In Autumn a great tit bird sits on top of a branch. The leaves, which are about to fall, have turned orange and brown, colours that contrast beautifully with the pale blue sky behind. Finally, Winter features the branch depicted in the previous three paintings which is now bare. A robin perches on top of the branch whilst snowflakes fall around it, creating a serene and tranquil atmosphere.

This work was inspired by the artist’s love of Japanese Ukiyo-e woodblock prints which first emerged in the 17th century. Ukiyo-e, meaning ‘pictures of a floating world’, often celebrated the beauty of nature in all its annual stages. Blossom was also a typical subject of such prints, which Pete pays homage to. 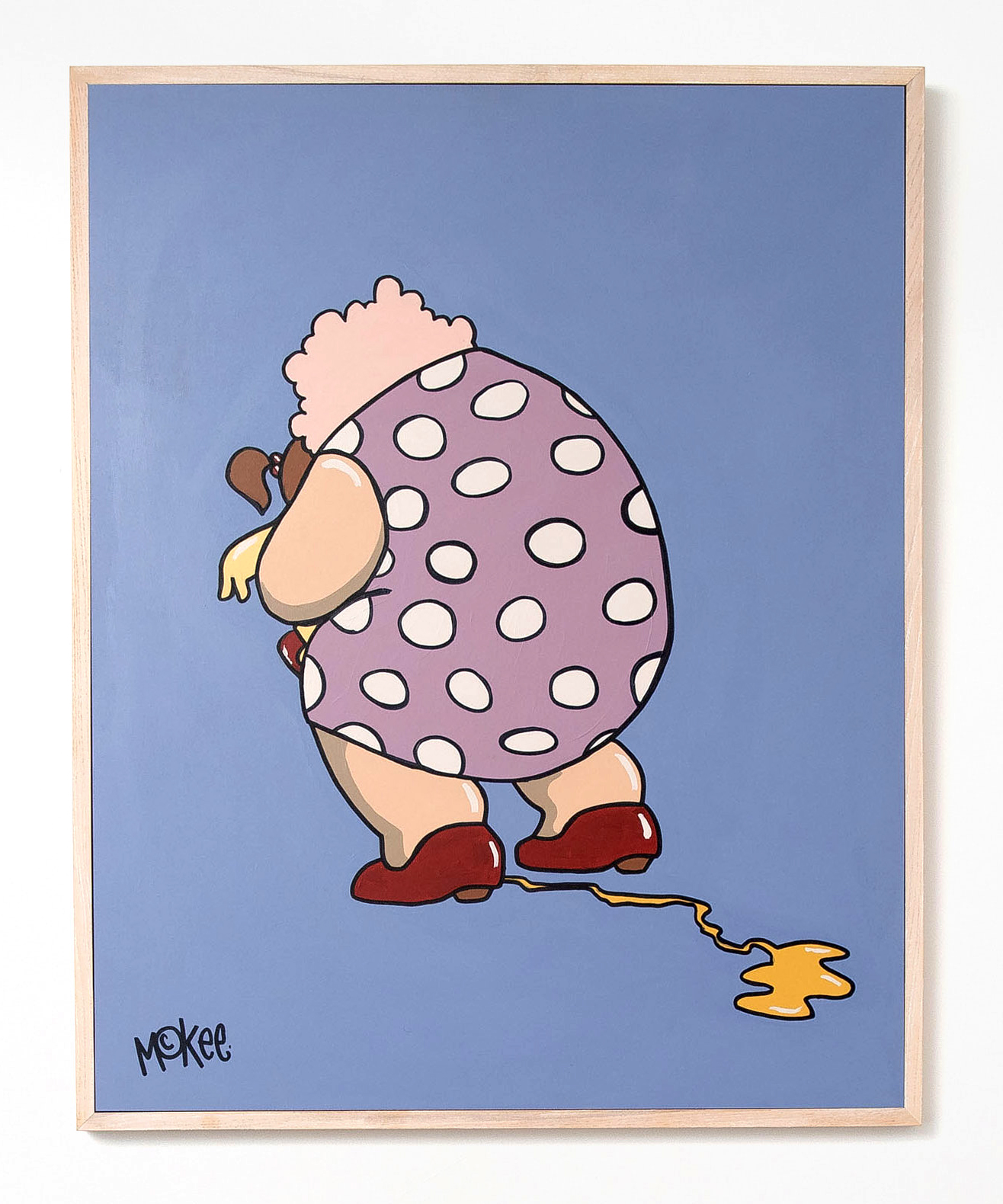 Caught Short is a humorous work by the artist painted in the early years of his career. Visually this work draws influence from Patrick Caulfield, as the flat colours separated by strong black lines echo this. This work's aesthetic is also rooted in the 1960s pop art style, as the artist has used bright, bold colours, some of which contrast with each other.

Pete drew on a memory when creating this work, taking us right back to the 1970s. "I don't know what it was but kids never seemed to be allowed to use the toilets easily when out and about, like they can nowadays. It was difficult to just simply nip into a department store to use the facilities, so every now and then you'd see a young child being aimed over a grate in the street by a parent or grandparent, trying to hit the chosen target as quickly and discreetly as possible. Needless to say, this seemed to prove difficult." 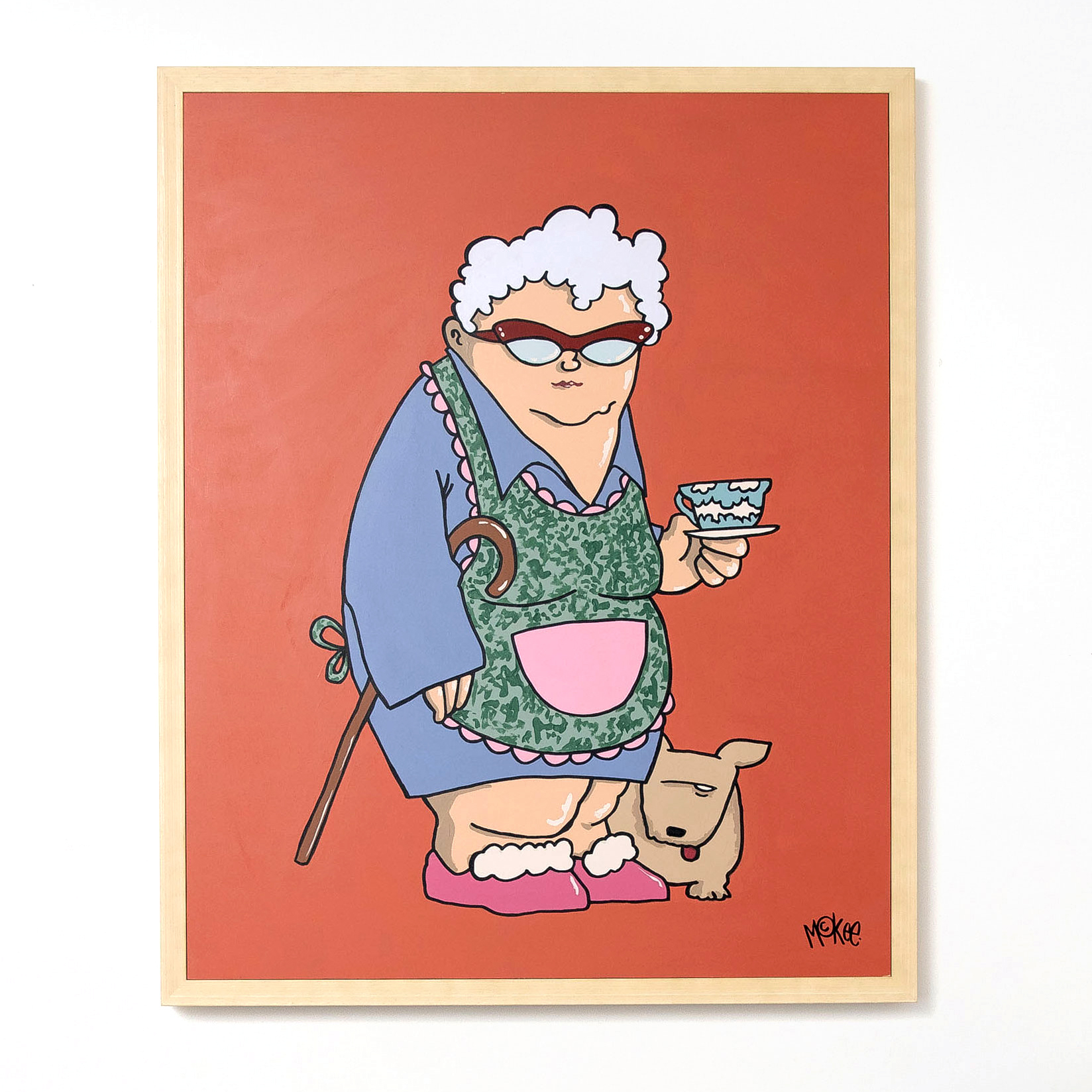 Tea for One and Biscuits for Two depicts a vivid memory from the artist. "When I was 15 I worked as a labourer. One of my jobs involved working on a house. The next door neighbour was a lovely elderly lady who made us lots of brews that came with a side of biscuits while we were working. She was always accompanied by her rotund, blind dog, who loyally hobbled along beside her. She clearly adored this furry, little companion, but I couldn't help but suspect that she showed her affection but feeding it biscuits on a regular basis." 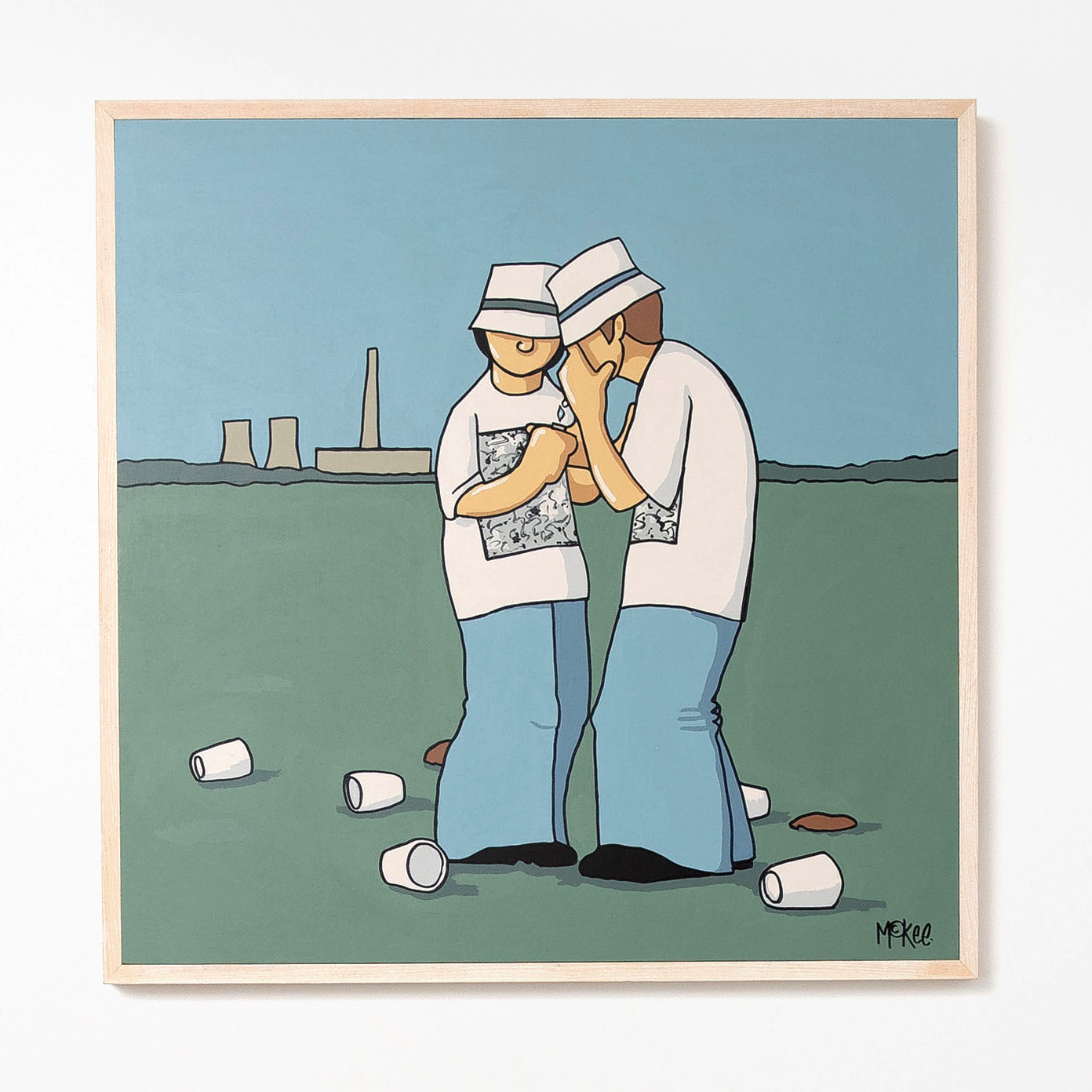 For Everyone a Religion marks a significant moment in music history: when the The Stone Roses played at an outdoor concert at Spike Island in Widnes on the 27th of May in 1990. The concert was attended by around 27,000 people and had support acts which included; DJs Dave Haslam, Paul Oakenfold and Frankie Bones, among other artists. This event went down in history as it was considered a failure at the time due to sound problems and bad organisation. Over the years it has garnered a legendary status, now referred to as the 'Woodstock' for the 'baggy' generation. The title of the painting refers to The Stone Roses' frontman, Ian Brown's first single, 'F.E.A.R', from his third solo album Music of the Spheres.

"Baggy. One of the last music fashion movements. From this point onwards, kids stopped listening and wearing the clothes, closed their curtains, turned on their computers and worshiped a new electronic god." - Pete McKee 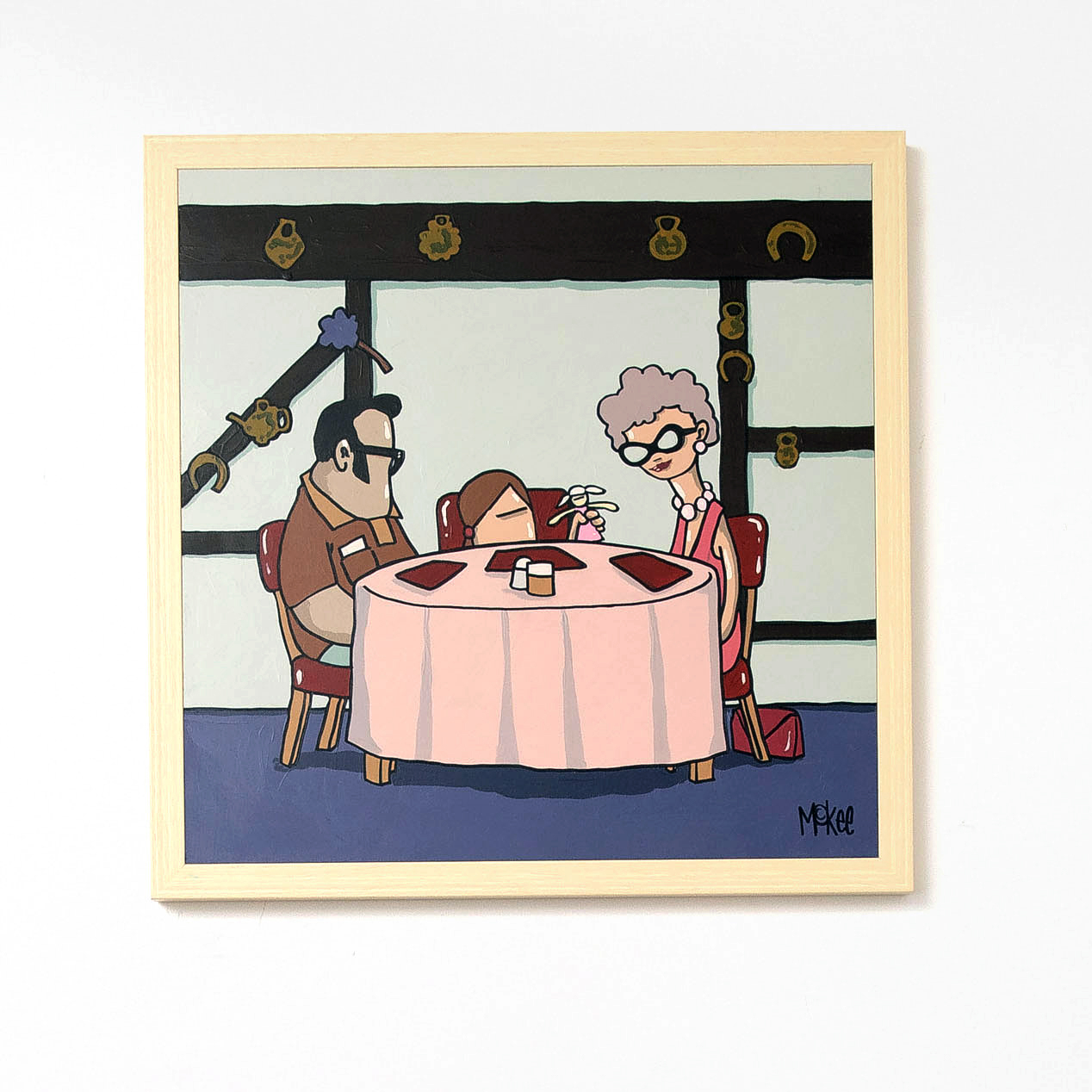 Posh Dinner Out references a memory from the artist's childhood. On discussing the work Pete stated that "back when me and my family used to go on holiday in the '70s to a seaside resort, we'd sometimes stay at a BnB where the catering would be sorted for us. However, one evening out of the week we'd venture to a restaurant, which although was never posh, my family always treated it as if it was. We were told to keep quiet and to keep our elbows off the table. The place mats were always made of leatherette and the main would invariably consist of a couple of lamb chops, two scoops of mash and some mixed veg. The height of sophistication." 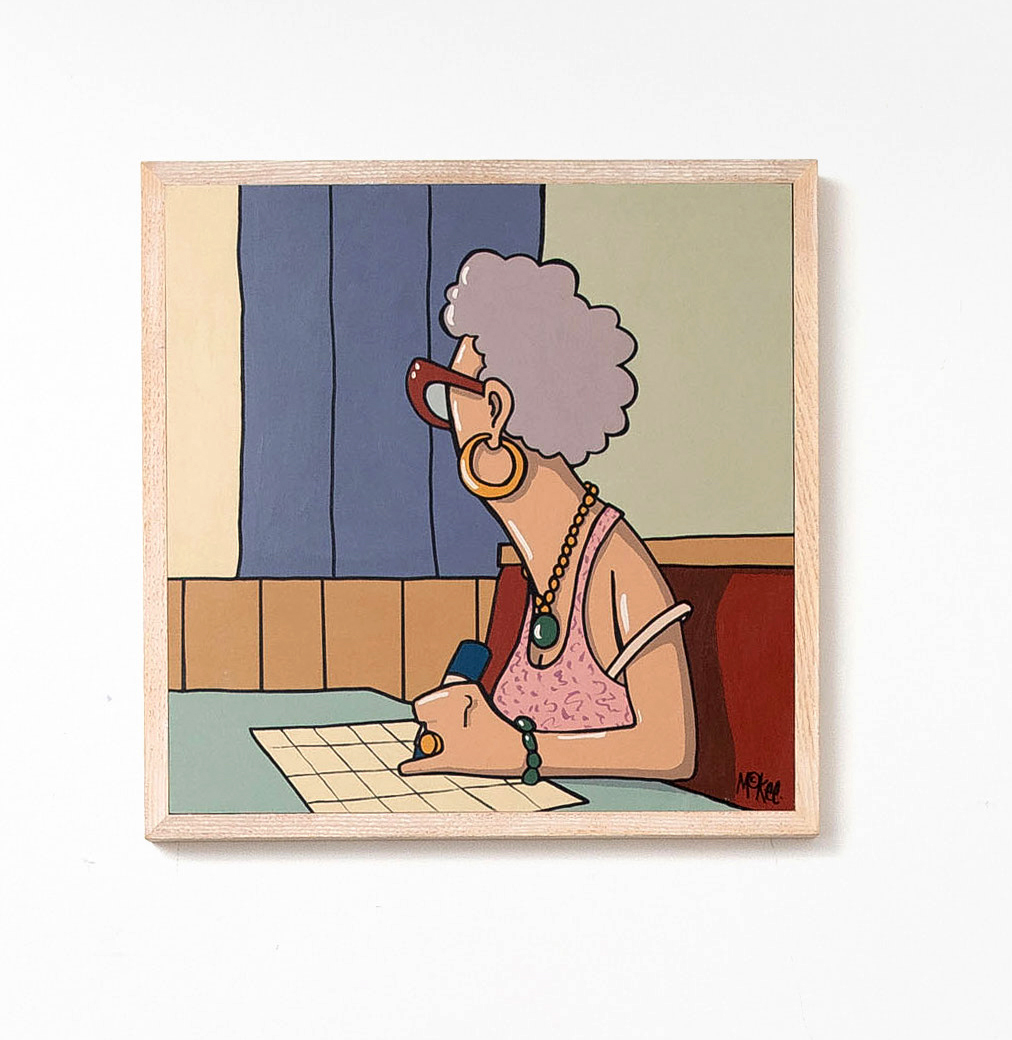 Shake Em Up, painted in 2009, depicts a scene the artist has witnessed countless times. Here a woman enjoys a Saturday evening treat, playing bingo a her local working men's club. She sits at a green Formica table whilst she looks up at the stage in frustration which the title of the painting alludes to. She hasn't had any of her numbers called out in a while and only needs a couple more. As she looks up at the caller who spins the cage, all she can think is 'Shake Em Up!'. 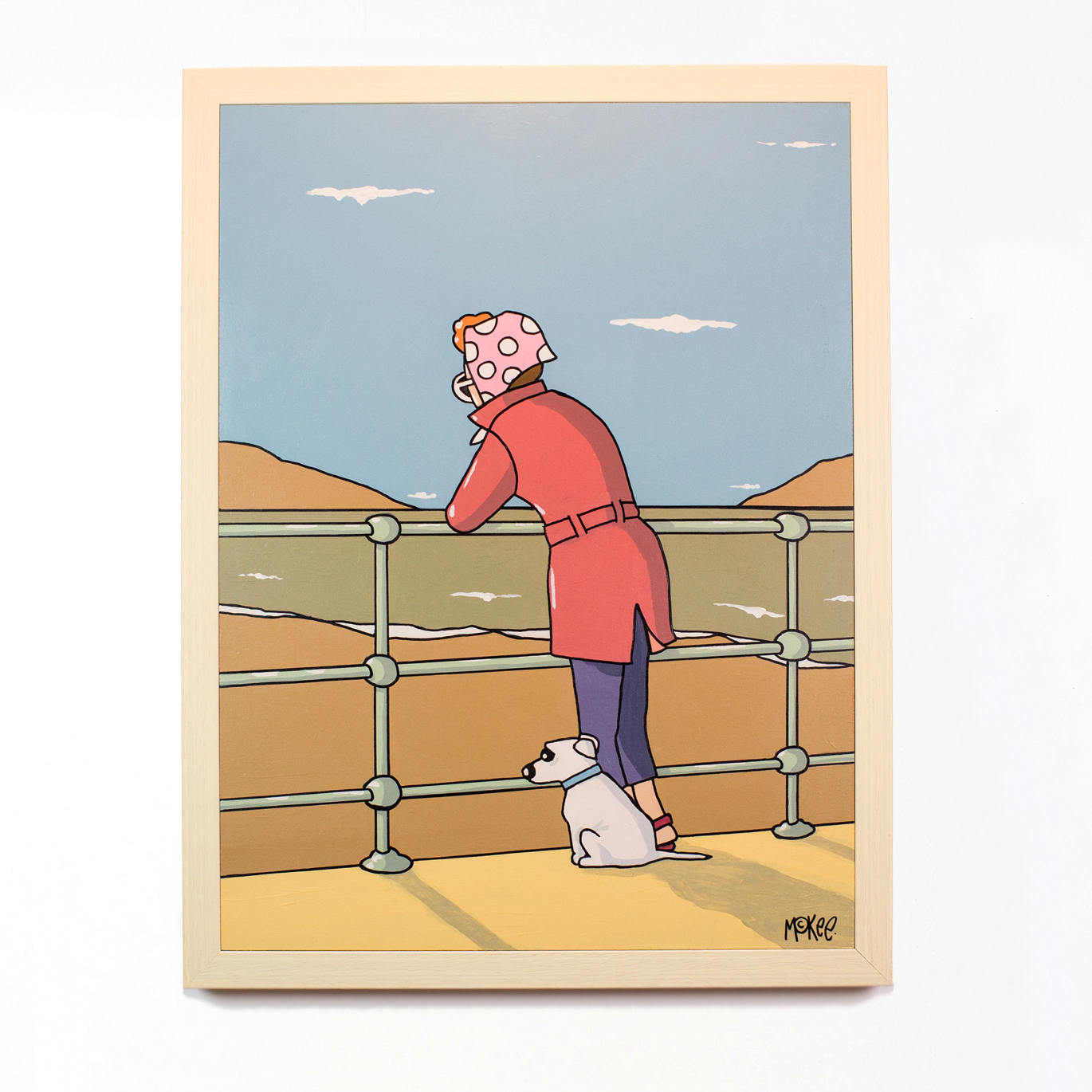 Lost in the Moment painted in 2019, depicts a tranquil scene at the seaside. The person in the painting is taking time for themselves as they lean over the railings on a promenade with their canine companion. Pete has revisited such contemplative scenes in his work before. This type of scene is inspired by his love of American artist Edward Hopper. "My observations of the lonely, the single, the widowed, and those taking a quiet moment away from their other half, are indebted to Edward Hopper's studies of solitary individuals." Seaside scenes are also typical of Pete's work, as the artist spent many childhood holidays in the North East of England on caravan sites by the seaside and still does to this day. 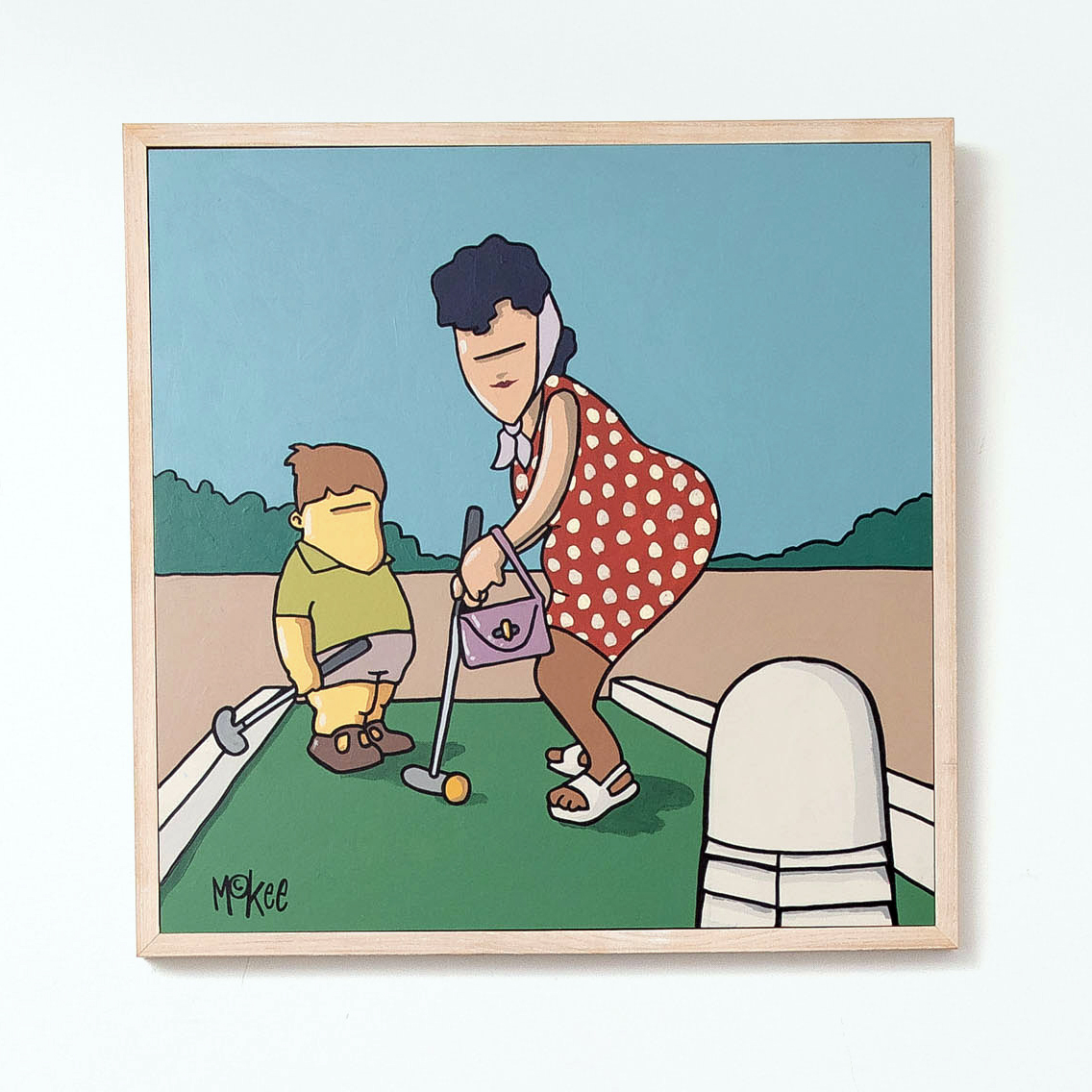 It's the Taking Part is a McKee work that draws on the artist's experiences of growing up. Although this painting is not a direct portrayal of the artist's family, it details something Pete experienced countless times growing up through the use of different characters. In this work a young child and their mother play mini golf, something that Pete did as a young boy with his family when spending a week of the school summer holidays by the seaside. Although this scene captures an everyday moment, the work has a tender message, which celebrates these small and important moments when parent's bond with their children.